Go if: You are an Ashton fan. You have a keen eye for demanding technique, quick steps and plenty of characterisation in dance. You like stories involving fantasy femmes fatales, mermaids and ill-fated romances, especially those with a Victorian edge.

Skip if: You can’t put up with a difficult non-melodic score. Hans Werner Henze’s modernist music, tailor made to resemble a continuous flow of water & spray of the sea throughout the ballet has been a hard sell with many, including Ashton himself. 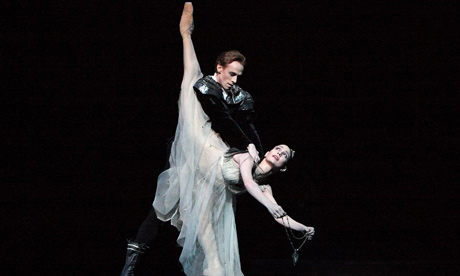 Ondine is a 3 act ballet originally created by Sir Frederick Ashton as a vehicle for Margot Fonteyn. The ballet, like the Opera “Rusalka”, is loosely based on Friedrich de la Motte FouquÃ©‘s novella “Undine”. Ondine is the only Ashton ballet choreographed to specially commissioned music and where Ashton worked in close proximity to the composer, Hans Werner Henze, providing him with plenty of notes and details on precise timings for steps. The costumes and designs by Lila de Nobili evoke the 19th century romantic classics such as Giselle against a maritime backdrop, think “La Sylphide under the sea”.

When it premiered, the critics hailed Fonteyn but expressed reservations against the music. The audience’s difficulty in connecting with the work also had to do with the fact that Ondine is more concerned with generating a mood and trying to replicate the feeling of water in dance, than with telling a straightforward story (although there is plenty of symbolism for the smart ballet goer to reflect on). It has little pyrotechnics to generate thunderous applause and plays to the lyrical strengths of the main ballerina in its fluid choreography and aqueous motifs. Ondine is a substance vs. form ballet, its subtlety might not appeal to everyone’s tastes but it’s a work which shows Ashton at his most avant-garde: its continuous undertow of dance was probably a major influence for Kenneth MacMillan‘s own seamless (& mime-less) choreography later on.

See below a short video where ballerina Tamara Rojo and veteran ballet critic Mr. Clement Crisp talk about the story, the music and motifs in Ondine:

Ondine is a water sprite (or nymph) who emerges out of a waterfall onto land fascinated with her own shadow, something she had never seen before. She is observed by Palemon, a mortal man, who is completely entranced by her innocence and gentle manner of playing and marvelling at the sight of this shadow. Realising she is being observed, Ondine is at the same time drawn to and repelled by the human figure of Palemon, especially when she feels his heart beat (as water sprites have no hearts or souls). Dancing a beautiful “watery” pas de deux where Palemon tries to grab and hold slippery Ondine, they fall in love and decide to marry.

Before her marriage Ondine is warned by her uncle Tirrenio, Lord of the Mediterranean sea, that marrying a mortal and thus acquiring a human soul is against a water nymph’s nature and potentially fatal, should Palemon ever betray her. Ondine decides to ignore Tirrenio’s warning as she loves and trusts Palemon to be faithful. Little does she know that Palemon has broken a previous engagement to mortal Berta in deciding to marry her.

Palemon and Ondine get married and set out on a boat trip. A terrible storm unfolds caused by Tirrenio to force Ondine to return to the sea. She is lost overboard and Palemon, having survived the shipwreck and believing Ondine to be forever lost to him, ends up marrying Berta.

On the day of their wedding heartbroken Ondine reappears before a perplexed Palemon. Meanwhile, Tirrenio exerts revenge against the new couple by bringing destruction to the palace and to all of Palemon and Berta’s guests. It is then that Palemon realises his betrayal and the price he has to pay: he longs to be reunited with Ondine and tries to kiss her but when their lips finally meet, he dies. The ballet’s final Victorian looking tableau shows a grief stricken Ondine watching over Palemon’s lifeless body which she has dragged under the sea as an eternal keepsake.

Ondine is part of The Royal Ballet’s Summer Season from the 27 of May – 6 of June, with Alexandra Ansanelli, Miyako Yoshida and Roberta Marquez in the principal role.