Since mixed reviews (including our previous opening night write up) have plagued the Royal Ballet’s celebratory “Ballets Russes Triple Bill”, I approached last Friday’s penultimate performance with a mixture of curiosity and excitement. By now, I thought, with most of the “nerves” gone and all the quirks fixed, it is not unreasonable to expect the dancers to be at their best.Â  I had also brought with me the ultimate tester for impact, a friend who had never been to a ballet performance. I was interested to see how she would gauge these ballets, given the stylistical differences between them.

Les Sylphides started with Chopin’s Prelude in A (op 28) sounding wonderful, even ifÂ  a tad too slow in tempo. The curtains opened to show beautiful sylphs in pristine white Romantic tutus, standing in perfect poses. The cast was full of replacements: Johan Kobborg instead of Federico Bonelli as the Poet, Yuhui Choe instead of Alina Cojocaru and Helen Crawford replacing an indisposed Lauren Cuthbertson, as announced just before curtain up, so only one (Laura Morera) out of three sylphs had been originally cast. But all these cast changes did not detract and if Les Sylphides is supposed to evoke mood and display the beauty of dancing, I can happily report it did, thanks to Yuhui Choe and her sheer virtuosity: she was ethereal, vaporous and light. Her bourrÃ©es barely skimming the floor and her arms full of delicacy; her balances lasting for all eternity and her jumps with landings so soft that one could think she was floating. Helen Crawford was a good fit for the Mazurka, but she still looked more like a maiden dressed as a fairy rather than a real spirit of the woods.

The corps de ballet were in great shape and although one would wish for a bigger display of ethereal qualities, which sometimes depend not that much on the dancing but on the dancer, every gesture and movement was precisely timed and positioned into the succession of dances. As the poet, Johan Kobborg gave a decent performance, his cabriolÃ©s a delight (pure Bournonville goodness), but I felt this was not a role that plays to his strengths.

One thing that bothered me in Les Sylphides more than the slow tempo (for at times the music did speed up) was the strong lighting which prevented us fromÂ  experiencing the eeriness of Benois’ design of ruins in a dark forest. I longed for a darker stage with only the light on the white of the tutus (a suggestion of moonlight) allowing for a glimpse of the ruins and the surrounding trees.

Next in the programme was Alastair Marriott‘s Sensorium, a strikingly contrasting work, even though the inspiration behind it somehow resembles that of Les Sylphides. Marriott wanted to give a choreographic response to Debussy’s preludes in the same way that Les Sylphides is Fokine’s response to Chopin’s orchestral suite. As I wasn’t aware of which particular preludes were going to be used in performance, I decided to just try and make the “sensory associations” that Marriott wants from his audience.

In a midst of extensions, contortions and twists against a backdrop of salmons, blues and nudes, there were moments in Sensorium in which the choreography suggested images of wind, sea and sand. In particular, there were two pas de deux, the first with Rupert Pennefather and Alexandra Ansanelli (who is retiring at the end of this season) and the second with Thomas Whitehead and Leanne Benjamin. Both were well matched pairs, with Rupert faring quite well in a non-danseur noble role supported by the gorgeousness of Alexandra’s extensions. Leanne and Thomas presented more of a passionate “twisting and turning” pas de deux that was very enjoyable and contained some classical steps amidst the unusual shapes. The last prelude incorporated all the dancers and had the main couples surrounded by blue bodies moving as if they were waves in the sea (in something that resembled yoga’s downward dogs!), the peach background evoking a windy sunset. This was probably my favourite “sensation” from Marriott’s choreography. The downside is that nothing in the ballet is particularly memorable (with the exception of Colin Matthews’ Debussy’s orchestrations) so I see this ballet being probably revived a couple of times before fading away. 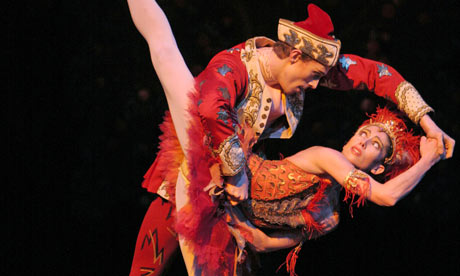 The Royal Ballet in The Firebird. Photo: Dee Conway Â©. Source: The Guardian

As “The Firebird” Roberta Marquez was literally on fire: her jumps were athletic (quite a big jumper she is!), her turns were flashing. Her hands expressive and her gestures spot on at all times. Trapped by Ivan Tsarevich, you could see the Firebird’s surprise and despair on her wings, how she tried to free herself. In fact, Marquez and the ever awesome Gary Avis as the Immortal KostcheÃ¯ were the highlights of the performance. First Soloist Valeri Hristov danced the part of Ivan, a bland role that doesn’t require much from the male dancer. The corps and members of the Royal Ballet School were good as the various creatures in the final scenes and the designs and costumes are something to be admired on their own. However, it occurred to me that this piece would be better placed with other narrative ballets rather than abstract pieces, given that it’s so rich in mime and huge dramatic ensemble scenes.

All in all, in this Triple Bill the Royal Ballet came up with a good display of dancing which more than honours the memory of Diaghilev: variety of styles, great dancers and music, which makes it great for newcomers: my friend loved Les Sylphides and was mesmerized by the images it created. She also found Sensorium to be interesting and contrasting. However, she felt let down by the Firebird, in the sense that she was not expecting so much theatricality to be served up last, after the abstractions of the previous pieces. For me, that summed up what a good triple bill should be about, a treat for everyone. For me? This triple bill was certainly not perfect, but it had its moments.

Ballet in Peril: A Conversation With Jennifer Homans

Is ballet ready for its close-up? Is it indeed bursting with vitality; the art form to watch in 2011? We reach the end of…