This post is devoted to big jumps, usually the territory ofÂ  male dancers, though some of them are also done by ballerinas. These tend to draw gasps and applause from audiences (after all, some of them are extremely hard!) and comments in dance reviews. Given there are plenty of jumps in the ballet syllabus, we will focus first on a small subset. As usual, our intention is not to teach but to pass on general knowledge and illustrate the movements with words, images and video links.

This is probably a jump that features on most ballet performances. JetÃ© means, literally, thrown. In this step the dancer throws each leg at 90 degrees (and opposite directions) while jumping. It is usually preceded by a step like a glissade to gain momentum, followed by an arabesque position or attitude. 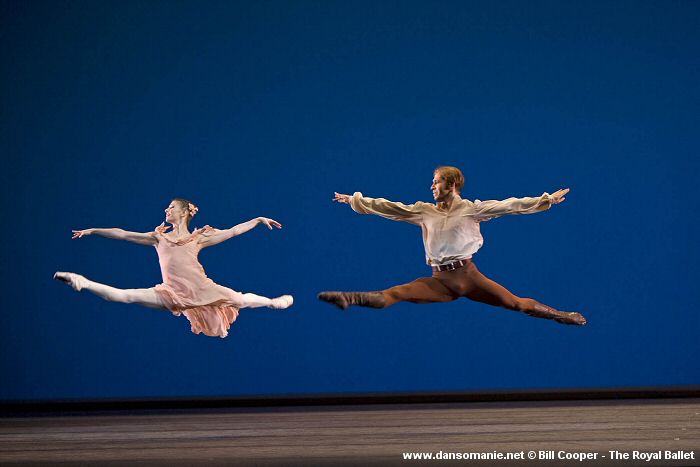 When grand jetÃ©s are done around the stage in a continuous sequence, as is typical in a classical male variation (note the princes’s variations in Swan Lake & The Sleeping Beauty), they are usually refered to as JetÃ©s en manÃ¨ge.

A grand jetÃ© done in a circle. While the dancer throws the front leg, the body turns and the second leg is thrown to the back.

A step in which both legs are beaten in the air. The dancer starts with a grand battement and the leg that is underneath follows and beats the front leg, sending it higher. The dancer lands on the leg underneath.Â If there are two beats, it is usually referred as double. Â This step can be done from any position of the body (devant, derriere orÂ Ã  la seconde).

The Royal Ballet’s Johan Kobborg executes a couple of cabriolÃ©s, in the Don Quixote variation.

This is a travelling jump. The dancer starts with a grand battement Ã  la seconde, and the body turns, while the pushing foot folds into the other leg, positioning itself in a coupÃ© position (that is, in front of the ankle) and landing in fondu.

Here Houston Ballet’s Randy Herrera does a saut de basque at the end of a sequence of turns.

This is a very flashy bravura step. The dancer turns in the air, throwing one leg to the back in attitude to lead the movement, while bringing the other leg along.

The Royal Ballet’s Carlos Acosta does a series of barrels (around the 1.53 mark), in this extract of Le Corsaire, with some saut de basques at the beginning.

A variation of the barrel turn where the body turns 540 degrees. The throwing leg stays in the same position, while the other leg moves over it. This daredevil, not-your-everyday-jump is usually reserved for galas.

Here Mariinsky’s Denis Matvienko does a couple of 540′s in the coda of Le Corsaire.

Note: Whilst we have used widely known names for these jumps, note that terminology might vary slightly from school to school.

Polina Semionova To Guest With ABT For 2011 Met Season

The following exciting news came today via an ABT press release: Berlin State Opera Ballet’s Polina Semionova is to debut as a Guest Artist…