The Royal Ballet’s newest Principal dancer, aussie Steven McRae, charmed the hearts of these Bag Ladies since his first appearances in Covent Garden. At just 23, he has climbed through the ranks and made an impact on every single role he has been cast on. From his debut as one of the side soloists in Ashton’s demanding Symphonic Variations, his first big role and his outstanding Spirit of Fire, in Christopher Wheeldon’s re-reading of Homage to the Queen (Fire) to his unforgettably boyish Romeo opposite Alina Cojocaru’s Juliet, this strawberry blonde dancer has more than justified his fast rise.

His undeniable technical abilities to spin multiple, fast and very centered turns, soar high and “freeze frame” in the air, as well as his inherent musicality and charm are guaranteed to dazzle audiences and it seemed clear from the candid (some would say downright bold) way he spoke to the BBC a few years ago about the fact that he was never going to be a happy camper in the corps de ballet where he first started. As we look forward to Steven’s first season as a Principal dancer, here are some interesting facts & web notes on him.

Steven McRae in a Nutshell

Born in Sydney (Plumpton, in the Western Suburbs). Like many men in the dance world, he started ballet at 7 years old because of his sister. He also did gymnastics, jazz and tap dancing.

He won the gold medal of the GenÃ©e Competition in Sydney (performing Danses Concertantes) and scooped the first prize in 2003′s Prix de Lausanne, despite not having started full time ballet much long before the competition.

He joined the Royal Ballet School, where he studied for three years, before finally being offered a contract with the company. His first role was in the triple bill “The Wedding Bouquet/Requiem/Les Noces”.

His first big break was in Symphonic Variations, sharing the stage with Johan Kobborg and Federico Bonelli.

He has had work created on him by Wheeldon, McGregor and Marriott, among others.

Steven works closely with long time principals Johan Kobborg & Alina Cojocaru, having danced important roles in Johan’s productions of La Sylphide (as Gurn) and in Napoli Divertissements and more recently creating a role alongside Sergei Polunin and Cojocaru in Kobborg’s short virtuoso piece Les Lutins. At the time of his debut in Romeo & Juliet the press reported that it was Alina who had asked for him to partner her when Kobborg became injured.

Steven partnered Alina in the pas de deux ofÂ Balanchine’s Stars and Stripes at the ROH’s World Stage gala in Nov 2007, having also travelled to Tokyo with her that autumn to stand in for Kobborg in Ashton‘s The Dream (debuting as Oberon). They are due to reprise their partnership in Japan later this year dancing in The Nutcracker. 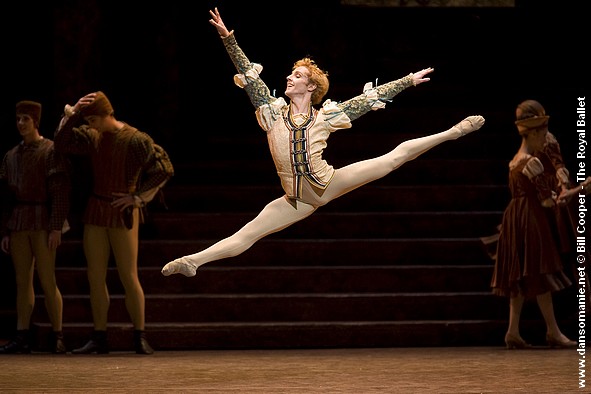 Steven is ambitious, competitive and a perfectionist, placing major importance on developing his roles. His most embarrassing moment occurred when his trousers split open during his first Fille Mal GardÃ©e. He is also a grateful student, takingÂ  time to visit his old ballet school whenever he visits Australia (usually once a year) where he teaches and mentors new generations of dancers.

His dream role is Des Grieux in MacMillan’s Manon.

A quick spin through YouTube & a glimpse at McRae’s superb technique and musicality:

Of his debut in Symphonic Variations

What the future holds for Steven McRae I dare not guess, but if he is not spoiled by too much – or too little – attention, he must surely have a splendid career. His dancing was exceptional in grace and security. Clement Crisp at the Financial Times [link].

Instead, and how sensitive this proved, his Romeo is younger, quieter than most in the early scenes, and then, when the fuse of his passion for Juliet is lit, burning with an inner fire that lights every step. Clement Crisp at the Financial Times [link]

McRae’s dancing is already polished by enthusiasm and an impressive classical technique and it holds nothing back. Debra Craine at The Times

Although only 21, McRae is one of the most technically accomplished dancers in the Royal Ballet and he brought an elegance and lightness of touch to sequences that have undone much more experienced performers. Luke Jennings at The Observer [link].

From his first minute on stage, you know his is going to hit the spot…his fizzing solo work cut the fastest, most deliriously buoyant turns I’ve seen in 15 years of balcony scenes.Â He also offered some uniquely nuanced character observation. Jenny Gilbert at The Independent [link]

If Covent Garden abided by entrenched Russian typecasting rules McRae would never have got beyond jester roles, which is essentially what happened when he played the Spirit of Fire (…). He’s fleet, slight, taut, acrobatically agile, extrovert, red haired and Australian. But McRae had already stretched beyond stereotype via Symphonic Variations and then partnering Tamara Rojo in Wayne McGregor’s monumentally successful Chroma. Yet none of these performances had really prepared audiences for his powerfully assured debut as Romeo. Allen Robertson for Dance Now (vol 16, n.4 Winter 07)

Of his role as the Spirit of Fire, in Wheeldon‘s Homage to the Queen (Fire)

Christopher Wheeldonâ€™sÂ Fire is filled with furious allegro and nervy shifts of emphasis, driven by Steven McRaeâ€™s bursting performance as the Spirit of Fire. Debra Craine at the Times [link]

Christopher Wheeldonâ€™s Fire has a demonic flavour, with a superbly athletic, explosive role as the spirit of Fire for the young and hugely talented Steven McRae. David Dougill at the Times [link]

and of his Nutcracker as the Sugar Plum Fairy Prince Cavalier

McRae is bright, brilliant-cut in technique, ardent in shaping a step or a phrase, and the role is his â€“ and handsomely so. Clement Crisp at the Financial Times [link].

Is this ballet for you? Go if: You love the thought of a mashup between The Sleeping Beauty (a classical, grand ballet) and a…