As UK audiences flocked to catch free ballet & opera performances via the BP/ROH summer screenings, The Times, invited by Royal Opera House (ROH) Chief Executive Tony Hall for a chat during the broadcast of Ondine at Trafalgar Square, ran an article which accentuated one of the biggest opera world dividers in the following line:

While the article focused largely on the ROH’s accessibility campaign via UK-wide free screenings and cinema distribution across Europe, it was hard to ignore the hint of inaccessibility suggested in the above quote. Most newspaper articles covering this initiative tend to adopt the same tone of “it’s either opera in cinema or top seats in the house”. Intentionally or not, they leave out the seating layers in-between and perpetuate the notion that only the rich can afford an evening at the ballet or opera. By pushing these two extremes at the general public, the media is preserving the snobbish/elitist perception of these art forms. The point about cinema is simply that it can reach a wider, global audience for an extended period (ie. months vs. weeks in the case of live performances), not necessarily that it is so much cheaper than attending a performance at the opera house.

The article made me think back on a brief conversation I had on the tube a while ago. I was slightly dressed up so a man next to me asked if I was going to Covent Garden. I responded I was on my way to a performance at the ROH. Upon probing further he finally asked how could students afford the cost of a ticket. MyÂ  reply that the ticket in question had only cost me Â£12, and that there were times in which I could get into the theatre for even less via the Student Standby scheme, seemed to surprise him greatly. 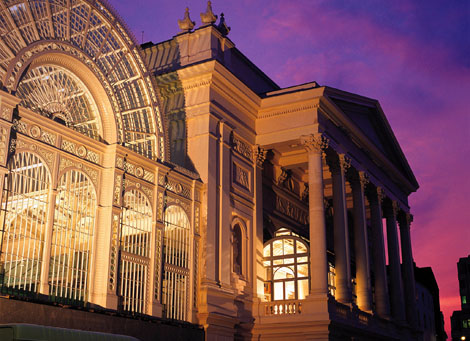 Turning this debate intoÂ  figures: irrespective of ticket prices, ballet and opera companies are non-profit organisations which are supported by citizens, in North America via donations and in Europe via taxes. For instance, the ROH has an annual grant equivalent to (approx) Â£27.5M in public money to fund both the Royal Ballet and the Royal Opera. In return for the subsidy the company must seek to broaden its audience. The ROH receives a further Â£15.3M from donations and legacies, and box office takings of aroundÂ  Â£35.6M (based on last year’s figures, a healthy number for recession times). When added, the previous numbers indicate that the ROH generates more than Â£2 for every Â£1 given by the government grant, thus avoiding deficit and justifying public spending on it. To keep its side of the bargain, recent changes have increased the costs for a top tier ticket whilst creating cheaper seats in certain areas of the house. In 2008, a quarter of the tickets were cheaper than Â£30 for full-length ballet productions (costing less in the case of shorter works), with the least expensive tickets costing a mere Â£6.

In 2008, The Guardian published the following “top tickets” price comparison:

A more up to date web search returns the following price estimates:

The comparisons above tell us that whilst top tickets for ballet and opera are indeed very expensive (notably those eye-poppingly exclusive grand tier seats), there are plenty other alternatives in every tier of the house, ranging from the equivalent of a movie ticket to the price of a football match (it brings to mind the quote – football is “poor man’s ballet” – a 180 degree shift in paradigm if you look at Premier league ticket prices).

If one considers the production costs associated with a full-length ballet, the expensive designs and costumes, the orchestra, etc. Â£15 for a ticket seems better value for money than all the other options above. Add to the equation the fact that certain ballet and opera companies run schemes with bulk discounts or membership deals (such as the Friends of Covent Garden scheme or The Sadler’s Wells multi buy discount) and costs dip even further.

(NB: For the sake of this comparison exercise I’ve taken into account the costs for full-length productions which are more expensive than a programme of mixed bills: Â£6 – Â£260 for the Royal Ballet’s Agon/Sphinx/New McGregor Triple Bill next season).

Of course, there will always be cheaper entertainment options out there and why not, plenty of stay-at-home ways to watch ballet and opera (TV, DVDs, Iplayer). However, live stagings give audiences a proper opportunity to fully connect and engage with the performers, the scale of which cannot be reproduced in cinema screenings or on DVD. And once you have experienced a live ballet or opera, chances are you will want to return as often as possible. Hopefully the above will serve to demonstrate that opera and ballet do not have to be a once in a lifetime experience or a special occasion treat.

The event? A marathon of Romeos and Juliets at Covent Garden. The challenge? To see almost every cast combination available. The result? A ballet…