We are lucky to be part of a group of people who can regularly attend ballet performances and who are exposed to a wide repertoire and various choreographers, but a huge percentage of dance fans around the globe are unable to do so, either because their location limits access to local or visiting ballet companies and/or because of cost. Add to that the fact that ballet on television is a rare event (for evidence one only needs to check the BBC4 programming for this autumn) and that DVDs are expensive and sometimes difficult to obtain outside North America and Europe. So how do these fans get their ballet fix?Â  In the past they would subscribe to magazines, buy illustrated books and hope to catch a live performance once in a while. Nowadays the web is their one stop shop. 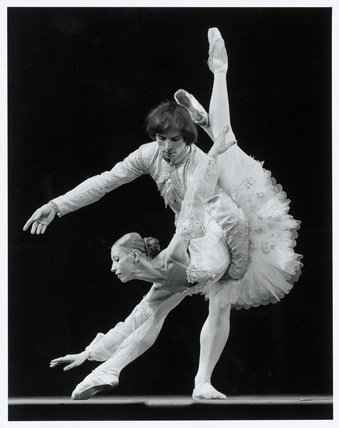 Thanks to the web and its wealth of materials about companies, choreographers, evolution of technique, and legendary dancers from the past (footage of their performances are a constant source of learning and inspiration for today’s dancers)Â  breaking down geographical barriers and educating not only future dancers but also global dance audiences is becoming more practical and viable. In this context, tools like YouTube and other streaming video sharing websites are helping make ballet more democratic and accessible, despite their imperfections and drawbacks (for instance the delicate issue of copyright regulations).

In an ideal world, streaming video content would be broadcast directly from or with the blessing of the copyright owner but in reality the bulk of ballet videos on the internet has been uploaded by private collectors. Although there are several companies with a strong YouTube presence – see our Virtually There post -Â  if you are searching for ballet videos you will most likely fall upon filmed performances or broadcasts that might not even be part of official company archives (as is probably the case with rare footage of virtuoso dancers from the Soviet era) shared by individuals who in one way or another have obtained them.

Leaving aside the questions of intellectual property and copyright law for a moment, as well as the definition of “fair use“Â  – although we agree thatÂ  posting an entire ballet performance can hardly be categorised in such a way – it seems that commercial gain is not the driver for most of these YouTube users who share their content freely. Profit or not,Â  some will liken these actions to “stealing” since theseÂ  accounts are effectively broadcasting someone else’s work without permission or payment of royalties, both of which are impracticable for a private user. So in most cases the YouTube user will upload content anyway until the copyright owner, wishing to prevent its ballets to be copied (and staged by non authorized companies) or otherwise, objects and submits a claim to YouTube.

But is it all bad news for theÂ  copyright owner? On the flip side, YouTube provides an opportunity for free promotion of the arts. The BBC tolerates private users uploading their copyrighted material onto YouTube simply because they consider this generates more publicity and free marketing for them. The same logic could be applied to ballet and ballet companies. For instance, those who live far from the Royal Ballet or from any other major ballet company might be more likely to purchase a DVD or travel to see signature ballets such as MacMillan’s Romeo & Juliet or Ashton’s La Fille Mal Gardee if they can sample one or more extracts on YouTube first.

What could be done to conciliate both interests? Perhaps sharing video could in the future work like curatorships? As in the case of a private collector who will lend its Monet to be displayed by a museum where the public will have access to a rarely seen work, if one tweaked this concept (as here the “video owner” is not really the true owner and low quality image does not substitute real performance) and applied it to YouTube one could argue that the greater good is allowing art to be admired by everyone. Again, not everyone can afford a Monet or maybe have the opportunity of admiring it in person. But since it is an acknowledged masterpiece, shouldn’t it be fair for everyone to see it or on the least, have a taster/teaser?

Let us focus on a recent example. The YouTube Ketinoa channel contained over 1300 videos of Mariinsky & Bolshoi ballets, including extracts of rehearsals, Vaganova Academy examinations, class syllabus, new and vintage performances. Steering clear from the issue of who owns the copyright, this channel served as a film archive accessible to anyone wishing to further educate themselves or simply to enjoy great ballet extracts, with user comments largely praising its content. Last month this channel was suspended because it was found to contain a small subset of copyright protected videos featuring ballets by Balanchine. The claim was submitted on behalf of the Balanchine Trust, the body in charge of protecting the legacy of that choreographer. Assuming the channel owner received a notification asking for immediate removal of the offending videos, if he/she complied then the account could be re-activated, provided offending videos were not re-uploaded. But YouTube could also have pre-emptively suspended the account without notice to protect itself from any potential lawsuit, in compliance with the Digital Millennium Copyright Act (US), which seems to have been the case with the Ketinoa channel, based on claims by ongoing campaigns to save it (see first link in this paragraph).

We think it is a shame that because of a small subset of videos a whole archive of Mariinsky/Bolshoi rare videos should vanish for good and it seems that petitioning is the only way for YouTube to re-establish the channel (minus offending videos of course). If you were a subscriber or a user of the Ketinoa channel and would like to see it restored you can write to copyright@youtube.com.

Our new guest blogger, Houston Ballet’s Harper Watters, picks up from where he had left off on his journey from summer intensive student to…