While over this side of the channel we continue to bury ourselves in Mayerlings and other fall season balletic offerings, Paris Opera BalletÂ  has returned to the Palais Garnier from their summer break with the eternal Romantic classic Giselle. As they are just a couple of hours away by Eurostar, our friend Juliet Ashdown could not resist the lure of a daytrip. Here she shares some impressions of last week’s performance: 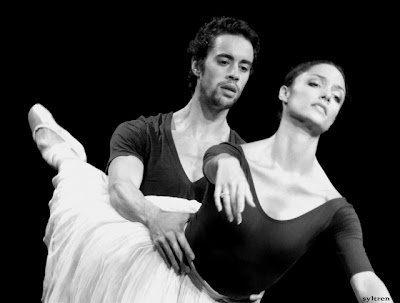 Mathias Heymann and DorothÃ©e Gilbert in a rehearsal of Giselle. Source: Syltren.blogspot.com Copyright belongs to its respective owners.

It has often been remarked that the Paris Opera Ballet dancers might seem cold in their interpretation of ballet classics which prioritizes classical excellence over drama. It is true that in this Giselle, adapted by Patrice Bart from the original choreography by Jean Coralli, Jules Perrot and Marius Petipa, the first act mime is not conveyed as clearly as in Sir Peter Wright‘s production for the Royal Ballet and it is also true that the dancers lack a certain warmth overall, but they more than make up for it with their stylish dancing.

Fortunately Alexander Benois‘s staging leaves them more room to display all thisÂ style, with the two huts set further back in the stage and a backcloth with a castle far in the distance, making the Royal Ballet’s sets seem cluttered by comparison.Â  The colours for sets and dancers are also brighter here, with creams, reds and greens.Â  The peasants’ dresses are longer and floaty, although it is a pity that the puffed sleeves should give them such an aristocratic air.

While DorothÃ©e Gilbert‘s more reserved Giselle did not act out the most poignant mad scene I have ever seen,Â  she really came into her own in Act 2, so assured and elegant, her first dÃ©veloppÃ© into arabesque long held and rock solid. She dazzlingly travelled though her series of backward entrechats and in the main pas de deux with Matthias Heymann‘s Albrecht, she was enthralling, ethereal.

22-year old Heymann, POB’s newest (and youngest) Ã©toile had only recently debuted as Albrecht. He was excellent, his grief totally embodied in the role, his dancing fautless. His jumps are very powerful but understated enough to show the grim situation he finds himself in whilst overpowered by the Wilis. However, there was nothing understated about his flawless series of over 30 entrechats-six, which earned him an enthusiasticÂ  mid-performance ovation.

The 2nd Act of Paris Opera Ballet’s Giselle is one of the most beautiful I have ever seen, not only because of the perfection of their strong corps who present us with a superb Wilis scene but also thanks to the gorgeous sets and costumes. The Wilis’ tutus are of the lightest fabric and look more shimmery than those worn in the Royal Ballet version, their veils disappear all at once thanks to crafty pulling from the stage wings.Â  In the background we see the ruins of an abbey and Giselle’s grave has a large cross from which we see her rise.

Yet, it is not just the stagecraft but the little details, like Myrthaâ€™s (StÃ©phanie Romberg) chilling crown which looks like ice from the back of her head or the way she bourrÃ©es forward so silently, so ghost-like, that make this Giselle such an endearing production. 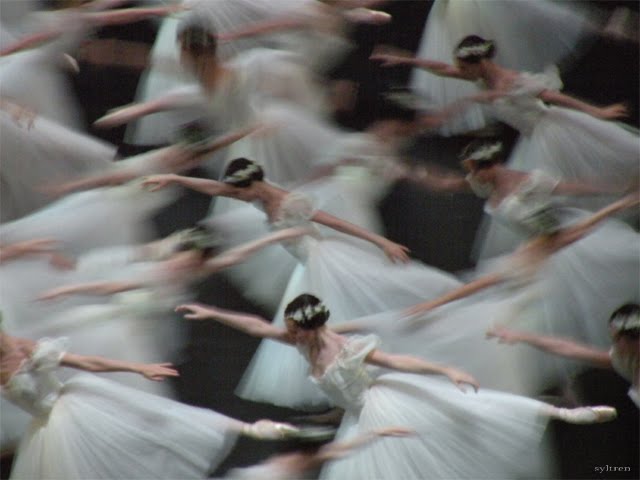 This is a review for the matinÃ©e performance held on October 10, 2009 at the Palais Garnier. Giselle is in repertoire until the 12th of October. Casting available from the Paris Opera Ballet’s Website.

The Firebird, In the Night & Raymonda Act III: A Photo Gallery

The awesome Alice Pennefather shares with us her latest batch of images, taken at the general rehearsal for the Royal Ballet’s most recent triple…